Sorry to revert back to a sports related post, but the greatest month for sports fans is coming to a close, and the NBA is about to get going, so it is more than appropriate. (October is the greatest month in sports because it is the month that leads up to the fall classic-the World Series in baseball, football is in full swing and on television all day Saturday and Sunday, basketball gets going, and even Hockey gets underway. All sports fans have something to look forward to in October. Every sports columnist has made this comment at one point or another in their career.)
So on to basketball. NBA basketball specifically. When Rebecca and I met, we were huge basketball fans. We both loved the Jazz. (The Jazz were an easy team to be fans of, since we both grew up in Utah, and the Jazz represent Utah's only true professional team.) We went to a couple of games a year, and we even dressed up in jazz paraphernalia and made a Jazz themed jell-o trying to win some season ticket contest. So yeah, basketball was in our blood. 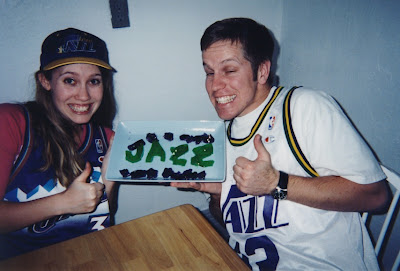 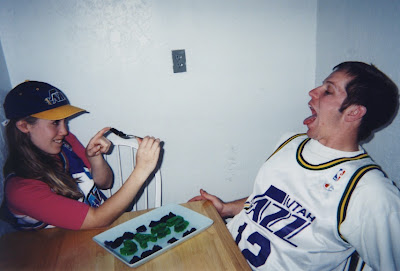 I have always enjoyed playing basketball as well. 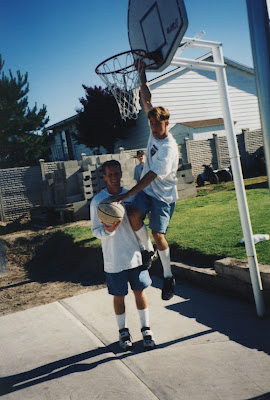 I have never been very good. This always perplexed me because of all the sports, it is probably the sport I have played the most. Practice makes perfect right? Well, as my brother pointed out, Perfect practice makes perfect. All these years I was just practicing being horrible at basketball, says he. Point taken. I would rather ski anyway.

I have great basketball memories, like when my college roommates and I drove down from Logan-after the Jazz beat the Rockets to go the 1997 finals-just to meet the Jazz team at the airport. We were all watching the game as Stockton hit the shot at the buzzer to win the game. Then the announcers mentioned they were flying home tonight and if fans wanted to greet them to "come on down to such and such gate at this address." I'm not even sure we turned our TV off, we all knew we had to go. Minutes later we were driving, never mind our morning classes or whatever we had going. They landed at around 2 in the morning. Our friend BJ played the accordion and paraded around the area creating an impromptu parade and getting live on 1320 KFAN (albeit at 2 in the morning) with his crazy antics. We were loving it. Besides the fact that the Jazz were going to the NBA finals, we spontaneously drove 2 hours just to get a glimpse of them getting off an airplane and driving past thousands of fans in their cars. That and the impromptu parade led by my friend playing the accordion.
I lost interest in basketball in 2004 when a huge fight happened between players and fans. The NBA suspended a couple of players, but not civil charges were pursued. It made me sick. Never had I personally witnessed a free pass being given to professional athletes. I am not naive enough to pretend it doesn't happen in all sports, but this was too much for me.
I am slowly coming back as a basketball fan. 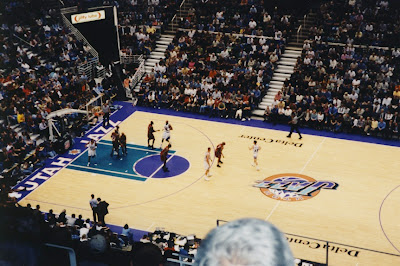 I have an idea that would make me like basketball more though. It drives me absolutely nuts when a professional basketball player misses free throws. There should be no excuse. These cagers (why do they call them cagers?) have played hoops since they were 2 years old in most cases, and free throws are part of the game at every level. To shoot less than 95 percent should be unconscionable. I see two options here. First: If a player drops below 75 percent, they should be suspended from games and not allowed to enter until they can certify to league officials that they have brought their average up. This could be achieved by having the player shoot 100 free throws in practice until the average is reached. My second idea would be to pay the player the percentage of his salary that corresponds with his free throw percentage. So if someone like Shaq is signed for 100 million dollars this year, with his free throw percentage of 61, he only gets 61 million dollars. Just a thought. If any of you have connections with the league, send them my way.
All this said, the Jazz open their season tonight. Has the NBA instituted the blackout rule like college sports and NFL have done? I haven't heard, but I will be watching game 1 of the World Series anyway.
Posted by Chad at 15:08

Lame. I lost interest in the jazz when everyone retired and they up and got a whole new team. Lame. I'd rather watch Real Salt Lake. Now there's a sport.

I left the Jazz after they lost the NBA finals 2 years in a row. If Malone would have made his stupid free throws, they would have won. *spit!*

I also married a man who does not do sports. Wierd - considering I grew up knowing every single NBA player and their info. So, for the past 13 years, I have pretty much been sport-free.

Basketball is the best!!! Poo on those first three girls.

no pooing on me, I have a husband obsessed. I am however, a bigger fan of the Jazz since they got my pretty boy Kyle Korver...yum!

I totally agree with you about the free throws. If you are playing basketball professionally and you are making millions of dollars a year, there is no excuse for you to miss a free throw. After all it is "free". I second your idea of tying free throw percentage to to salary. Maybe at that point players would care more about getting their percentages up. For instance the Blazers were playing the Denver Nuggets for their second game of the season. It was a close game up until the very end. At with about 5 seconds left in the game Greg Oden was fouled and was at the line. He missed both of his free throws! Had he made them the Blazers could have won. Instead he missed both and Denver got the rebound, took it down the court, and I believe that it was Chauncey Billups that made the winning shot. This is extremely disappointing to me because I hate Denver! I want to see them lose whenever possible, and had Oden made his free throws the game could have been completely different.