Nothing Changes On New Years Day

We are approaching a new year. This is a time that has always represented starting over. Doing better. Making a huge change. A clean slate. I always wondered "how did this come to be?" Where is it written that making life changes needs to correspond with years end? I tend to have the more pessimistic approach. As Bono put it, “Nothing Changes On New Years Day.”

Why do we wait until the calendar changes to make changes in our own lives? I was under this mind set in the past. Always setting deadlines and “this is thelast day I will do this or that.” Thinking that somehow there will be a newfound power by coordinating my goals and desired changes with the change of a year, the coming of a new tide, a full moon, no moon, a blue moon(of course the really big changes are saved for the blue moons, since they are so rare), extended sunspots, or sometimes if my horoscope lined up right. More times than not, these magical time periods really didn’t help me, and I found myself pushing deadlines back to correspond with the next phase of whatever looked like it would be beneficial to me. Basically, creative procrastination.

Then I realized that these galactic events and calendars didn’t mean squat. They were about as effective as Daniel Laruso using the Crane Kick against Chozen, the local chinese karate guy that wants to fight to the death. 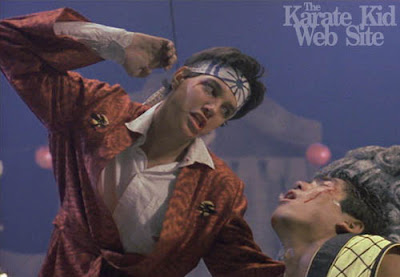 If you have forgotten, the Crane Kick was a staple move in Okinawa, and Chozen easily blocked it. Lucky for Daniel-san this was a sequel, and Mr Miagi had taught him a whole new finishing move based on a baby rattle that everyone not only owned, but happened to have with them when this movie ending fight ensued. 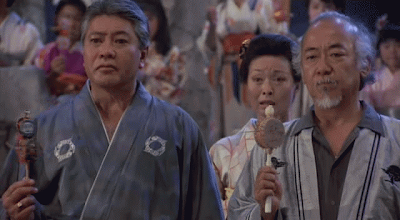 Damn, I either need a rattle or my own personal Mr Miagi. (Just for the record, I am absolutely against Will Smith remaking the Karate Kid with his son as Daniel Laruso. This is a travesty that may get its own blog post.)

Many people make resolutions to go the gym, to eat healthier, to wake up earlier, to go to bed earlier, to be a better person, to go to more MLB games, to stop spending money on Pez Dispensors, or whatever. ( I am excluding all references to religious related changes. We all have our own personal Mr Miagi’s in that regard.)

One of my favorite Simpsons episodes is the Treehouse of Horror IV (Halloween special) in which Lisa and Bart stumble across a hangout for vampires. Both are absolutely scared to death of these vampires. During the chase scene, Bart is running up a long spiral stair case. Lisa is in front of him. Bart comes across a switch in the stairwell that says “Super Happy Fun Slide.” Bart stops and looks at the handle. Nothing is said, but you can see the inner struggle in his mind as he contemplates his decision...If he pulls the switch, the vampire will surely catch him, if he keeps running, he may escape. Well, Bart shrugs his shoulders and pulls the switch, changing the staircase into a super happy fun slide. Bart loves sliding down it, until sliding right into the vampire who proceeds to do vampire stuff to Bart, makes Bart a vampire, and then the two of them chase after Lisa.

I often feel this way, making great progress on things I have wanted to change, but along comes the Super Happy Fun Slide and I pull that lever. This nearly happened the other day at Thanksgiving dinner. I was so close to having a Cherry Pepsi that I was ready to throw away my 2 years and 5 months of success to hop back on the soda pop wagon. (Or is it off the wagon? Seinfeld?) I have said before and will probably say again, this was one of the hardest things I have ever done-giving up soda. I am not looking for praise here. I'm just sayin'.
Thanksgiving's near miss made me wonder..Will this ever be easy for me? Or is that what's its all about? A never-ending battle like the one between the Utah Jazz and a championship ring? I hope not, I can't go that long.