The other day I was sitting in my man-cave(formerly known as "my den", but I was informed that calling it a den went extinct with the final episode of Growing Pains) looking at my baseball cards, and it got me thinking about the act of collecting. What makes us want to collect things? (note: this is not a sports post)
I know for me its a natural inability to throw things away, but I also seek out certain things. I have talked a little bit on various occasions of my baseball card collection. I started collecting cards in Junior high because it seemed like the thing to do. Many of my friends were card collectors, and after a few trips to the "card shop", my interest peaked and I started collecting my own. It was cool to have cards of the players that you saw on TV. As I started collecting it became apparent that there was some serious potential for money making. Or so I thought. 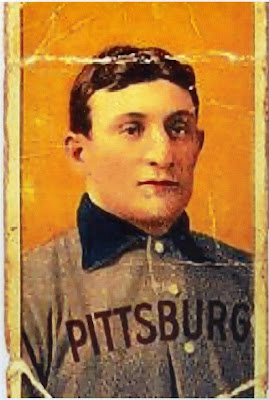 If I owned this card, I could sell it for its book price of 2.35 million dollars. Problem is there are only 40 of them known to be left in existence. It is a 1909 Honus Wagner.

My first love as a young kid was money. I used to sell my unwanted toys in the neighborhood. I would put them in a red wagon, pull them around to friend's houses and sell them off. (Come to find out, if I had just kept some of those original GI Joe and Star Wars figures, I could make a killing off them now!) My Dad used to compare me to Alex Keaton. I tried hard to master the ability of knowing which coins were dropped just by the sound they made. (See Family Ties Season 2 episode 8- I think). So I started the whole baseball card collecting experience with the idea that I would save them nice and neat in boxes for 25 years and then sell them for huge profits. 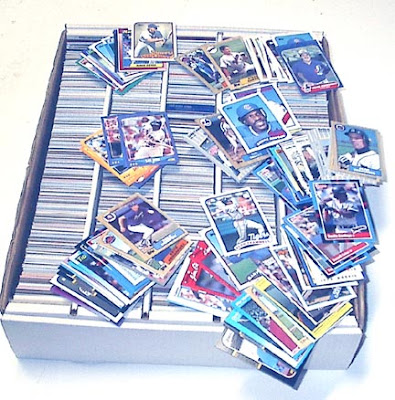 And here they sit, in my man cave, and other places. I have probably close to 250,000 cards. I have no idea how much money I have spent on them, but their combined value is probably around 10 grand. Yet I continue to collect them. I missed the boat when Mark McGwire broke the home run record a few years ago. His card value skyrocketed. I have about 20 of his rookie cards that I never paid more than a couple of dollars for. I held out, thinking they would go up and up like a Michael Jordan rookie, then the steroid news broke. His cards plummeted faster than my brothers and me when we tried to jump off our roof using home made parachutes made of bed sheets and blankets.
My favorite player of all time is Will Clark. I used to do whatever I had to do to get every card ever made of him. He was my childhood athlete hero. A tenacious player. Plus he always put the cool black paint under his eyes. 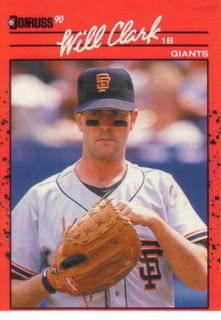 I have hundreds of his cards now. My cousin even got me his autograph on a baseball this past year.

So I ask myself, "Why?" Even though I can not think of great reasons to continue collecting, I continue to do so. I am also collecting mini baseball bats from each stadium I visit for a game. 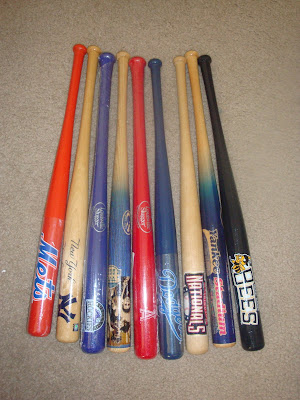 This collection has more of a purpose and meaning to me, so I get it. My daughter Tierra collects the papers that I crumple up and put in the garbage. I only found out about this recently. I am a huge "list maker" person. I make "to-do" lists, "to-buy" lists, "quotes to remember" lists, and on and on. I am frequently updating these lists and rewriting them, or even making new ones. As I do, I throw out the old. Tierra has been secretly keeping these crumpled up lists of mine. This cracked me up. I actually have to be sneaky to throw papers away at my house. I collected my belly button lint while I was a missionary. Had a ziplock bag full after my 24 months. When packing to go home I wondered why I had collected it and threw it in the trash. I kind of wish I had that still.

So my question is, what do you friends and readers and family members collect and why? There has got to be some cool collections out there. My brother Danny collects memories of his stupid 10 dollar purchases. (See a previous post about my New York trip last year.) Another friend collects Pez dispensers. My mom collects Mickey and Minnie mouse plush dolls. My grandma collects mini spoons.

While thinking about this collection topic at work the other day it occurred to me that I think some people collect "911 calls." Or they try to set the record for how many times they can call 911. A lady the other day had called us 3 times in 48 hours, and she didn't even have any emergency needs. The 3rd time she called was only 40 minutes after the 2nd time. When we walked in her house she says to me, "You look familiar, do I know you from somewhere?" I said, "Yes, I was here 45 minutes ago." She acted surprised. Nice try lady, I know I am just part of your collection now.
Posted by Chad at 14:51

One word comes to mind...Horder!

First, I think some one should start a blog just about Family Ties. Greatest. Show. Ever.

I am not into collecting much, maybe serving bowls and recipe books, the Jared is a pack rat. While we were on the honeymoon, ya baby, Jared's mom decided to pack up all of his junk. We came home to boxes and boxes of crap. For example: Milk box from lunch in elementary school that never had milk in it and was still closed, Notes and Notes from Jones' class, Garbage Pail kids, those crappy cheap charms everybody was collecting in third grade and all of his pinewood derby cars. That was just the good stuff. It stayed in his man cave for years. I think he has consolidated to three or so boxes, but we continue to drag it with us everytime we move. I will always be a big fan of just throwing stuff away.

I seem to be collecting various parking/traffic violations lately. I'm about to be arrested for a wierd violation while rafting with the youth in August. They sent me a judgement and everything! I'm feeling kind of rebelious!

No really. I collect memories, I guess. That's why I journal and blog. But my Neal had junk. Dozens and dozens of lunch baggies full of the following: bullets, army type patches and pins, coins, paperclips, magnets and rolls of film. I laugh every time I find one. It's like his little boy collection.

One time we collected all of our toenail and fingernail clippings for a year and gave them to one of my sister's for a joke. That was a good one.

Funny the things people collect (like toenail clippings for instance, YUCK). A few days ago I found some keychains I had collected and my kids thought they were fun, especially Bart Simpson. I collected other things when I was young, then realized it was all stupid crap and threw it out or gave it away.

Cory has a HUGE coke bottle type thing that he keeps pennies in, and for no reason really except that he started it a long time ago and just wanted to fill it up. It's still not full and we've been married a long time, but there are A LOT of pennies in there. Unfortunately a penny is not even worth a penny so it's not going to provide us retirement or anything. I'm not good at remembering to contribute. I put all of my pennies in the use one/take one pot at the gas station. Cory also has some things that he keeps in a box but we don't get it out very often so I don't even remember what's in it, but it's important to him, so he's allowed to have one box. He used to have tons of cards too (not sure if they were baseball or basketball), but I think he parted with them before his mission.

I like to throw things away. Cory tells me someday I'll regret not having something interesting to give my kids but they'll have plenty of fun changing my diapers. That'll be interesting enough and it'll sure make some memories!

Good for you for holding onto your cards. I think that when you have a collection like that, it becomes so sentimental because you've been holding on to those things for so long, and you probably have lots of memories collecting.

I'm going to go throw out some trash now!

Now Chad, I really wish I could tell you about a really cool collection that I have but I don't have one. I don't believe in keeping anything that isn't necessary. I believe in keeping things clean and having collections of random things don't lead to cleanliness. I also have to say that your collection of belly button lint is probably the most disgusting thing that I have ever heard of!! I'm glad that you didn't bring that home.

Hmm... I often think of this same topic when Ryan has to buy TWO of the same Star Wars item because he needs one to play with and one to keep in the box because "one day it will be worth a lot of money". I always ask him why it matters because I know he wouldn't sell it anyway. Who knows, maybe "one day" it will pay off..??!!
I think it is good for someone to have a hobby if that is what they enjoy. Ryan and Carson both love it so it at least gives them something to do together.
Thanks for your always entertaining posts!

Okay you needed to put it wasnt a sports post in the title and I would have read it sooner. My neighbor calls 911 all the time, take yesterday for instance he called because the boys playing football at the park had a football that went into his yard twice. I think he is collecting Ass awards actually. Okay so to the point of your post. No wonder all the posts were so long, you are friends with a bunch of pack rats and really I am just the wind bag but not a pack rat. I do have garbage pail kids though and that is it. I know a few people who have a collection of kids. What number constitutes a collection anyway? the belly button lint made me throw up in my mouth. I am so so glad you threw that out or I am sure you would have shown it to me and there would be a better story than the mayo. The baseball card collection is impressive though. I also think you are collecting trips to Disneyland if your taking input on your own collections.
Oh yeah and I collect enemies
now look who is the pompous windbag. I owe all the rest of the posters an apology...but they wont get one.