250 years ago (give or take), Benjamin Franklin coined the phrase, "An apple a day keeps the doctor away." I can't but help but think how much different my life would be if he had said, "A root beer float a day, keeps the doctor away."? Ben Franklin was an amazing man, and I do not want to lessen any of his huge contributions to our Country by throwing root beer floats out there, but you gotta wonder don't you? 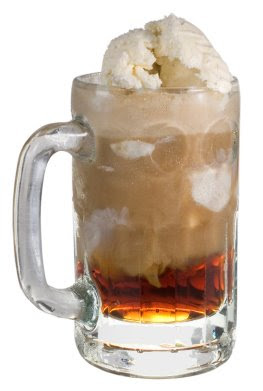 I don't know if it is true or not, but in looking at stuff about Ben Franklin recently, I found a website that did credit him with saying, "Root beer is proof that God loves us." Despite Mr. Franklin's great advice, I don't eat an apple a day either. I actually like every other form of apple. Apple sauce, apple pie, apple juice, dunking for apples, Apple Jacks, etc. I do not like a plain old apple. I think it may be due to the apple skin getting between my teeth, and as a kid I was so scared that if I swallowed a seed one of two bad things would happen: 1- a tree would grow out of my body, or 2: I would have a life long duty to be the new Johnny Appleseed. These things terrified me. This post is not about apples though, or good health. This post is not about root beer floats. It really isn't about anything. I just wanted to write. You have to wonder though, if vegetables were really the name for candy, would kids still have to be forced to eat them?

As a reader you do not realize the time span between paragraphs, but I just spent the last 10-15 minutes first looking through my cupboards to see if I could whip up a root beer float, and then another 10 to 15 minutes talking myself out of going to the store to buy the stuff to have one. If I hadn't been too lazy to find a shirt and my shoes, I may have been typing this while enjoying one. Other than a root beer float or 10 here and there, I gave up soda pop 2 years ago. Actually, it has been 2 years and 4 months. This was very difficult for me. I loved my Cherry Pepsi breakfasts. I gave up all caffeinated and carbonated drinks. My Lent, I suppose-though I am making it last longer than 6 weeks. I still drink the lemonades and fruit punches that are probably just as bad for you, but that is next on my list. I could not believe how hard it was to give these up! Seriously difficult. I am 12 percent suspicious of the fact that cocaine may still be in colas. I have loved my freedom from soda pop. I break my rule for root beer floats though. Is this wrong of me? Funny as this may sound, due to my cessation of all things soda, I feel empowered to the extent that I can accomplish anything in life that I set my mind too. (Totally stole that from Dr Emmett Brown.) 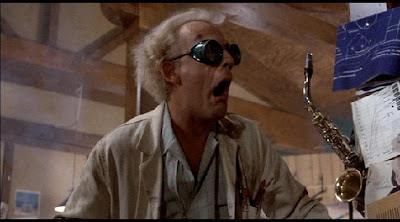 It is this same strength that I am calling upon to give up my fantasy sports addiction that Rebecca and Heidi challenged me to do. (I am not segwaying this into a sports post) Right now is sign up time for fantasy NBA, and it is killing me. I am going to stay strong though. Side note and off topic somewhat: I still haven't been able to regularly attend Sunday School either.

My free time that would be occupied by fantasy sports research has led me to watching more TV. I am now on the verge of having a few TV shows that I follow. (They just don't make them like Night Court anymore.) I watched an entire episode of dancing with the stars last night with Rebecca. I do admit that I was also playing around on the computer, but the show was on, I was listening, I watched a few of the dances of the girls I thought were hot. ( I have a crush on Samantha Harris.) Then it hit me, "I just quadrupled my lifetime exposure to this show in one sitting."
Rebecca and I used to have "our show." For some reason we got into a show called Third Watch. We both liked the first several seasons. We even named our dog after one of the cops on the show that Rebecca thought was cute. It was a fictional show based on firefighters, police, and doctors in New York City. Rebecca wants us to have a new show. I will admit that it was fun to have a show together. However, I struggle now because of a couple things: DVR and TV on DVD. I like watching an entire season in three or four sittings rather than waiting week to week to see what happens. So this is what has ruined my TV watching. I love DVR though. I just wish they still did reruns of night court. Back to Dancing with the Stars...(did I really just say that?) I think it would be a much more entertaining show if Bruno, in his excited voice would just yell, "Your Out!" to the couples that get voted off. All this suspense and drama by Tom Bergeron is lame. Bruno doesn't necessarily have to use the Major League Baseball catch phrase, but something equivalent.

So to go full circle, leave us a comment, or bring me a root beer float.
Posted by Chad at 00:36

Having a hard time finding something to do on your day off? Did you see the episode of 30 Rock where they had the actors of Night Court on? That's a funny show you could probably get into. Jared is liking it and he is p...ick...y.
Jared doesn't drink pop even though his last two kidney stones said they were caused by pop. He does the root beer floats a few times a year but that's it. I can't believe you admited to the www that you have watched BOTH of the dancing shows. I think I am going to see if I can get my comment as long as your post. Hm, what else......

I meant to say were....my fingers don't talk to my brain!

nope I was right. Stupid brain.

If you're going to have a "show" together, don't do "Dancing With The Stars." That show is retarded. Choose "30 Rock" or "The Office" or something.

And good on you, for giving up the soda - especially the caffienated kind. I quit the diet coke every time I get pregnant and a few other times in my past. But it never lasts. It's tough. Must be the cocaine.

I think you guys should watch that new show Three Rivers on Sunday nights on CBS. Or Community on NBC on Thursdays. That is Nathan and I's show

Whatever show you decide...it WILL always be better with a Cherry Pepsi. Sorry. I gave it all up once too...maybe I'll try again. Then again, maybe not. MMMM. It is my FAVORITE!!!