Best Job In The World

Rebecca and I have decided to lay off the sports talk for a while, though I do have a great idea for a post revolving around basketball for a few weeks from now. So during the sports break, lets start a new topic... Work.

I always tell people that I have the best job in the whole world, and I honestly believe that I do. The ironic part of this though, is that my good day at work means that someone else has to have their worst day. Sometimes "worst" can mean bad luck, sometimes tragedy, and often both. Take these next two pictures for example. The driver of this car was not also the owner of this car. Nope. The owner was his girlfriend's mother, who didn't know the boyfriend was going to "borrow" the car for the afternoon. So he takes the car for a little joy ride, probably just to run to the Quik-E Mart, or perhaps to the video store to rent a copy of Ghostbusters 2 for the night. Too bad he didn't make it and the car burst into flames! 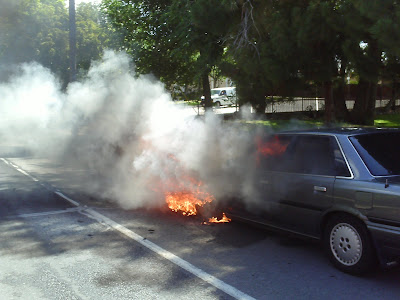 But his misfortune became a great time for me. Car fires are so fun to fight. Especially when there is a little bit of a crowd and the tires explode loudly and everyone runs away faster than an audience running from a Tom Cruise missionary moment. My favorite burning car is a any Volkswagen built before 1980. They made their engines out of Magnesium. Burning magnesium, when it comes into contact with water, creates quite a neat light display. Not quite comparable to the Bellagio Fountain show, but maybe like a 4th of July in Moroni, Utah. Magnesium, and other metal fires, can not be extinguished very easily with just water. This is especially fun when you are with a brand new firefighter, that hasn't learned that about burning metals. So, fun day for me. Bad day for boyfriend. I have often wondered if the relationship lasted. Probably not after coming home with a charred car and a copy of Ghostbusters 2. 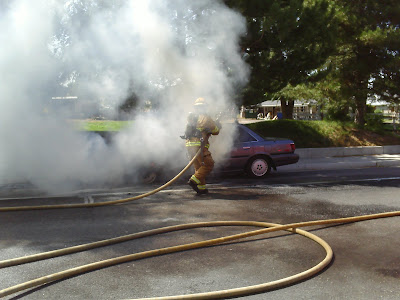 Then this sad story. The owner of this house was working in his garage, making his own home made fishing flies for the family vacation that was coming within a few days. Something distracted him, and he left the welder he was using to near something that was too flammable. Before he realized it, the fire was raging. A lesson here for readers, fire doubles in size every minute. So call 911 first, grab the hose, or extinguisher second. Not saying this guy made any of those mistakes, but the huge fire became a bad day for him, fun times for me. 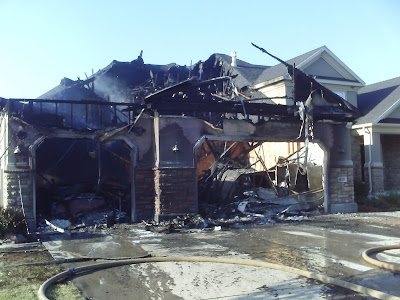 This often makes me sound terrible. I do not wish these tragedies or moments of bad luck on anyone. Our standard mantra among firefighters is that though we do not wish this on anyone, we like to be there when it happens. My job is to show up on people's worst moment, and do whatever can be done to lessen that, or make it better.

It is also comical when we get called to the most ridiculous of emergencies. What some people deem as their "worst day", is really a comedy show for us...after the fact of course. One particular call that made me laugh all the way to the next emergency was a guy that called us over to his apartment for a strange smell. At the apartment was a college age couple trying to sit down and watch a romantic movie. (It may have been Ghostbusters 2, but I cannot confirm!) The guy thinks there is something wrong with his furnace, because every so often he keeps getting a whiff of a strange smell. We investigated everything we knew how to do, but could not find anything wrong. This poor kid was so concerned, that we really tried hard to think of everything. Well, when one of our crew members was in a back room alone with his date, the girl admitted to having "gas" and trying to blame it on the furnace. I can't believe she let this kid get freaked out enough to call the fire department before fessing up! We kept her secret safe from her date.

I have thought about other jobs that would probably be wonderful jobs too. The first one that came to mind was the job of protesting. Have you seen those people that hang up the "Shame On" signs? 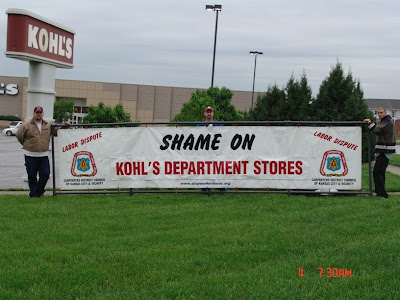 I am sure they are being paid to sit out there by the signs with their shade tents, water coolers, and endless snacks. This seems hard to beat to me. How does one get such a job? And who chooses who to call down the shame upon? Maybe that would be the better job, finding companies and businesses to "shame!" Does it have to stop with businesses? Could I make a "Shame on my neighbor's dog for pooping on my lawn" sign? This next one is a cause I can get behind, no matter the reason.

I have also thought about a job that isn't a job, but if it were would be fun. I would love to work for the "False Advertising Department" of a company. Seriously, if it were legal, moral, and all other applicable standards that this idea violates, sign me up. The possibilities are more numerous than the times Dwight Schrute has been passed up for promotion.
Seriously though, if there was not a requirement to have truth in advertising, think of the fun possibilities. I have some ideas that I will post in the comments section, but I want to hear some from you guys for about a week first.

The story about the college couple made me laugh! That is hilarious! I look forward to more work stories! :)
~Jamey

I hate those shame on you signs so please dont quit firefighting and start working for/with them. I can see why you love being the Hero.....who wouldnt. You get to see the dumbest of the dumb too which is always great. I will enjoy the basketball posts.....not so much the football if I hadnt already made that abundantly clear.

Yes, I think you DO have the best job in the world. It's my dream job. I especially love the firemen when they rescued me from a terrible car accident and my rescuer happened to be a kid a had a major crush on in Jr. High. Slightly embarrassing.

Your stories make me laugh! But I wouldn't want your job for all the money in the world. I would pull up to a house on fire, start thinking about everything that poor family lost, and start crying. Definately not the job for me.

Do you have a problem with Ghostbusters 2?

The lack of comments and interest in this post shows me that perhaps I need some false advertising for this blog.