Are social media sites making us less social? Think about it. There is not room for small talk in a 140 character message. We all skip the pleasantries, and get down to business. Just 10 years ago we were required to strike up conversations, learn pleasantries, and ask meaningless questions to act like we cared. Despite this previous post, I have rejoined the facebook/twiiter world, but wonder again if it is more damaging than good.

In some regards, this is a benefit. I was never good at small talk, because I typically just did not care. Sure, its polite to ask how the family is doing, and if there is anything new at the office, but in all honesty, do we really care? Furthermore, do we even understand? Further-furthermore, are we even honest in our answers? Imagine this conversation:

Casual Friend: “Yeah, it sure has. What’s new?”

Casual Friend: “I hear ya man. How’s the family?”

Me: “Well, my oldest daughter is really concerned about one of her friends at school always teasing her. She comes home each day talking about how she really wants to be friends with this girl, but that she is mean at recess. She has also been doing so well with her assignments that her friends accuse of her being the teachers pet. My boy loves to come home and watch old episodes of Tom and Jerry, and has recently been playing in a basketball recreation league. He's also obsessed with Star Wars, just like I was and and still am. My youngest sucks her thumb and can’t wait until the next Mickey Mouse clubhouse episode comes on. She also spends all day making messes of the house for her older brother and sister to clean up when they get home from school.”

Or suppose he/she asked me, “how’s work?” Does the casual friend really want honesty? “Well, we responded on a young adult that got so mad at her boyfriend that she overdosed on some medication, ending her life. Her parents found her dead in her apartment when they decided to stop by for a surprise visit. Then later that day, a new driver wrecked the family car while driving home from the drivers license division. Right after that we got called to a care facility for a woman that couldn’t stop throwing up. We were also called by the police office to do a welfare check on a man who lives alone with 96 cats and doesn’t bother cleaning up after them as they crap all over the house. A young family has to replace their entire basement carpet after a sewage system backed up, flooding the place. Then we had to go enforce the new EPA regulations and tell a family to put out the fire they were using in the backyard because another anonymous neighbor down the road was annoyed with the smoke. And to cap it all off, a young kid was left unattended and played with matches, burning down the families dream home.”

So yeah, social media may be helping our lives? My thoughts though, are that it makes us dumber. 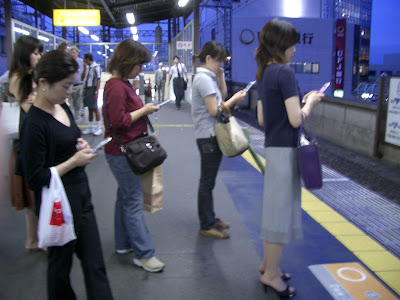 When we are with good friends or family, our conversation pieces are lacking, and I bet at any given family party, the majority of attendees are doing something on their smart phones, and hardly interacting at all.

What are the long term consequences of this? Perhaps the Mayans stopped the calendar at Dec 21st because they knew we would all have phones that announce the date to us each morning when we awake? Our social skills are going to deteriorate to the point that it will become a module in history classes in high school before too long.

Perhaps this is the extreme outlook, but think about it next time you are at a social gathering. Pay attention to your next conversation with an acquaintance. Think about if you really care about the answers you are asking for, or if you are doing it because you just want to end the conversation as quick as possible so you can get back to updating your facebook status!

All of your answers were just woman answers. That's exactly how we talk. We open our mouths and spew out as much info as fast as possible.

And I was riveting by the info on your family and work.

I actually loved your paragraph about work, remind me to ask about your job more often. So entertaining. Your kids are too but they sound too much like mine so I did zone out there!

I also got back on FB but dont use it very often and have found that to be the key.

Jared and I were just talking about this today.....Nobody really knows whats going on and even if they do ask, they are most likely paying attention to the dings going on with their phones. I could go on but I really don't want to.

FOr the record, I will talk to you any given day and that is just a bunch of bull that you were never into the small talk!

Natalie, I made most of the family stuff up, or grossly exaggerated it.
April, I downplayed most of the work stuff... I could entertain you for hours.
Angie, I don't consider it small talk when it is someone you care about.

First of all, you are such a great writer. I am always impressed with your way with words. Note that I would probably never say that to your face, but it's easy to compliment online. Or, for that matter, I probably couldn't be an ass in person either. But I could online.

I also was very interested in the entire post. I am always telling my high school kids to interview someone in the career they are considering. I will reconsider next time one of them tells me they want to be a fire fighter. You might turn them off. The cat guy makes me throw up a little in my mouth.

I agree with Natalie. Women do give long honest answers.

I would talk to any kid about being a firefighter. Its the best job in the world. It just doesn't make for good casual small talk conversation see...

And about cats... you should go to the homes when the owner of 50 or more cats has been dead for a couple of days and noone knew... I'll stop there.

Do the cats eat the dead person?

Write about more work stories. We all secretly want to be firemen. Maybe a weekly post on the craziest call you responded to that week.