The United States Equivalent to that Space Between Your Toes...

Oakland. Enough said? Probably, but I will say a little more.

As many of you know, I am "questing" to see a professional baseball game in every major league stadium. Then I want to write a book about it. This quest sometimes takes me to places I would never consider visiting otherwise. Occasionally, this is a pleasant surprise. Sometimes, though, it is worse than anticipated. I have tried to group my trips to get as many games per trip as possible, which can be logistically challenging, but also fun. Hence it was with Oakland. 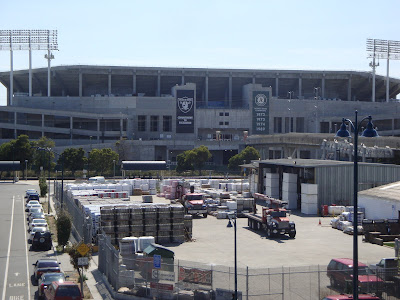 My intent was to go see a San Francisco Giants game. I was once a huge Giants fan. Will Clark is still my all time favorite ball player. I lost my Giants flavor a little through the cheating Barry Bonds years, but now kind of peek in their direction, like when you play hide and seek with the kids, and don't quite close your eyes fully...

Anyway, since San Fran and Oakland are just a bridge away from each other, I had to get both stadiums done on one trip. As I got to planning, I quickly learned that everything in San Fran is more expensive. Flights, Hotels, Food. All of it. So we looked at Oakland: the space between the toes of the United States. Seriously, to call Oakland the armpit would be a promotion. 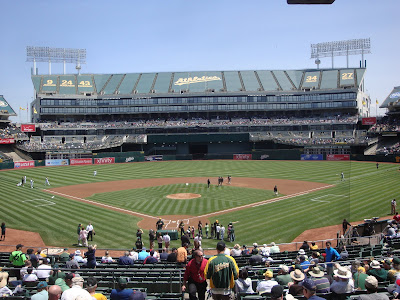 The sights consisted of the Coliseum, and the Arena where the Golden State Warriors play basketball. They were about 50 feet apart from each other. I didn't mind being inside the Coliseum, it was actually better than I had expected after talking to others. Cool, old fashioned baseball diamond and field. And that is all there is to see in Oakland. Honestly. I hurried to San Fran as soon as the game got out. 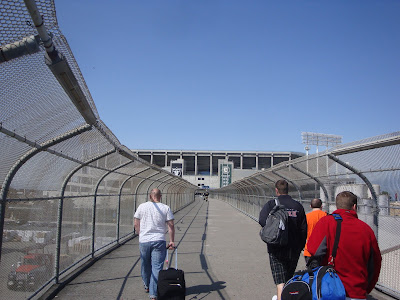 If this post were about San Fran, I would write a bunch more, but this post is about worst places to visit. I submit Oakland. I challenge you three readers to post (in the comments) about the worst place you have visited and challenge the title I am currently giving to Oakland. Read on.

At the end of trip, we had to go back to Oakland to fly home. Getting there: Easy. Cheap. Once there: Run for your life. Yeah, we got swindled at the BART station. We needed a ticket for AirBART to get us from the Oakland BART stop to the airport. While buying tickets we had unsolicited help pushing the buttons on the automated ticket dispenser. This local thought we would not be able to figure it out all by ourselves, so he helped. The catch was: He was not just a good samaritan helping some tourists get home. Nope. Apparently his services cost money, being the valuable commodity they were. So after helping us he told us we had to pay him. 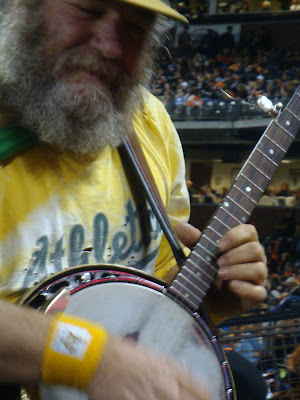 I gave him my BART ticket that still had $2.40 of unused fare. A travel buddy, Sean, "gave" him three bucks. Small change sure, but a priceless cap to the Oakland experience. Glad its done. Eight of us went on this trip, and none of us could think of a reason to ever go back to Oakland. Perhaps I should call the Raiders and see what convinced them?
Posted by Chad at 12:05

I think my bro in law went on his mission there. He took Nellie there to see it & she was scared (bray girls r not easily scared of places). Dave would maybe let u have ur Oakland since he fondly calls china the as$ of the earth. Try a baseball game there & lemme know whatcha think.

Ps I think you typo-Ed peak in this scenario. I kno u hate that stuff so I thought I'd b a pal

Grand Junction. We did a pit stop once and I think we found the place where germs are born.

Oh and Fillmore. You would be better off to just pee in a cup.

Dave is pretty accurate about China. And I even stayed in the nicest city in the whole country. Imagine walking down a crowded street, it's freaking hot and humid and everyone touches each other because asian sense of "personal bubble space" is foreign to us, and you get whiffs of cooking mystery meat, mixed with raw sewage. My sister, Angie, goes there a lot for work. She goes to the factory hell-holes. But, it makes for good stories!

Oh, and the wal mart in Ontario, Oregon is a close second.

Barkerfield is the arm pit of America. But I would say the space between Las Vegas and St. George on the I15 holds a close second.

Yeah, we agree. We went to a game there in Oakland on our anniversary trip to SF last spring. I felt like we were entering a high security prision when we entered the ball field in Oakland. Not much to look at. Crass, rude fans. Classless. Ugly place. Dirty. We agree.

I don't get out much. Is it like Magna? Ha ha. I always wondered why anyone would want to live in Anchorage, Alaska. China sounds gross. I vote for it just cause Natalies description made me throw up in my mouth a little.