I was driving home from the gym today (do you like how I added my location to slyly imply that I am a health conscious person?) and saw the Liberty Tax Mascot. The lady was jumping around and acting like a maniac, all the while sporting the Official wardrobe of the Statue of Liberty. At this particular moment, I was the only car for quite a few blocks, and I could not look away. 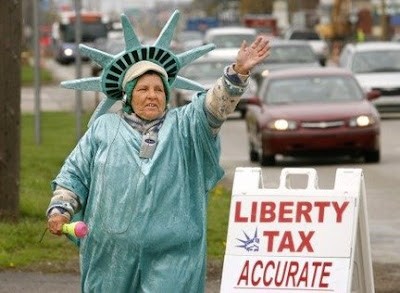 The lady was yelling and waving, but I could not hear her since my talk radio station was too loud, and I did not wave back, because I did not want to her to think I supported the Liberty Tax Company. This brief encounter, however, got me thinking: “What is the etiquette for these types of situations?”

I know politicians often do the “honk and waves” as election time nears. 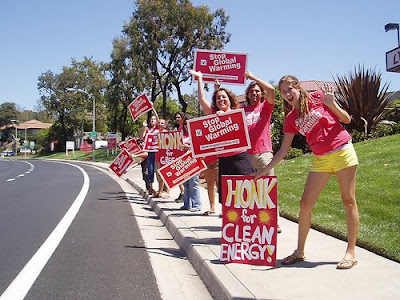 This is surely to get their name out there and fresh in the minds of drivers heading to the polls. I have also seen the 13 year olds advertising the Little Ceasers pizza that is “Hot N Ready for 5 bucks.” 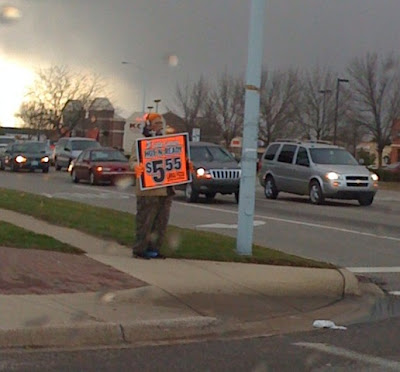 This must work as advertising because many companies have resorted to these tactics. I cannot honestly say that it has ever swayed my decisions when searching for fast food.

Back to the Liberty Tax Lady. Part of me feels bad that she is outside all day waving and trying to draw attention to herself with little to no reward. Should I have just honked and waved and then went on my way, even though I will never go to that business? Or did I do the right thing, to not give her any false hope of someone that supports that business? 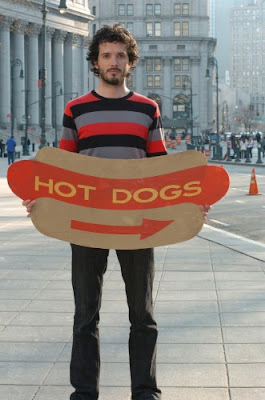 Aside from requiring their “street workers” to act ridiculous...I do not have anything against Liberty Tax, except that they have outrageous prices and I really like my tax guy. (He’s in South Jordan if anyone is looking for a good one. If one of you six readers goes to him, we both get a discount on our tax preparation fees.)

I have thought about this way too much, but I am still curious to know what the right decision is? I turn it over to you: the readers. Let me know. I think Mascots belong in stadiums, arenas, or other sports venues, not on the road to add yet another distraction to drivers.

Disclaimer: All photos were plucked off the internet and the author does not support, condone, or agree with any of them. Except I do like hotdogs and pizza.
Posted by Chad at 12:15

If Bret were waving to me, you bet I would stop!

I tend to have pity for fools dressed up and I tend to wave and give them false hope. The other day we had a cow chase us down at the Chick fil a! Scared the crap out of Jack but it did not sway my purchasing.

I say wave away and give them false hope, it will at least keep their employers thinking they are worht the minimum wage.

I pass one of those "kids" most days on my way to work only he works for one of those "rent your furniture" stores. It's weird and it makes me uncomfortable, too. I always hope for the light to stay green and just let me through so I don't have to sit awkwardly and try not to look at him.

I feel exactly the same as I do for the people begging for money. I feel bad for them and just mostly try to look away so I don't get teary eyed.
I would stop for bret too but only if he is singing "sugar lumps".
I don't think liberty tax should take such liberties w/the costume and put some of those disgusting people in them....no teeth? really?
at least i will say, they are willing to do something for the money rather than hold out a bag....or a boot like those danged fire fighters...LOL kidding about that. Who doesn't love a man in uniform?