I saw Karate Kid 2010 (from now on referred to as KK10) today. Warning, moderate spoiler potential throughout (though not much more than if you have seen the original!). I am liking the list format, so what follows is a list of reasons KK10 will never be the classic the first one was. I was hesitant to even see this movie, but I broke down and did it.

#1- No Elisabeth Shue. No elaboration needed on this one. She had to be the main crush of every boy in the 80’s. She is the only reason I watched Adventures in Babysitting 86 times. She was even hotter than Kelly Kapowski. 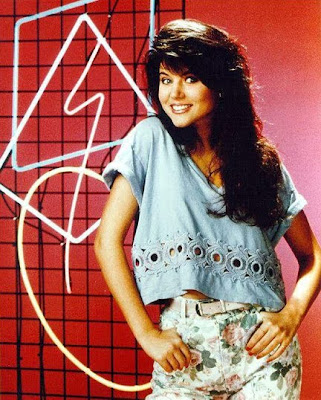 Top 5 crushes for me in those days (in no specific order): Elisabeth Shue (Karate Kid, et al), Tiffany-Amber Theissan (Saved By The Bell), Maureen Flannigan (Out Of This World), Nicole Eggert (Charles in Charge), and Markie Post (Night Court). This may negate the argument to number 5 below, but this list is from the 80's in whole, so I was almost 15 as the 80's closed out. Which one of these surprised you the most?

#2- I like Jackie Chan, and appreciate him as an actor, but he is not Pat Morita. I understand and realize that they did not intend him to be, but you can’t help but make the comparison. Since Mr. Chan is named Mr. Han, there is no more Miagi-Go Karate either, which I considered a classic line from the first one. Jackie Chan also speaks English too well. One of the better parts of the original was that Mr. Miagi spoke fragmented English and reminded all of us of Yoda in both wisdom and sentence structure.

#3- I was really hoping for at least a Ralph Macchio cameo. Most remade movies give some type of cameo to the original actors. What were they thinking? They could have easily sneaked him in. I would have wagered a large amount of money that he was going to show up as one of the match referees. Are they called referee’s in Kung-Fu?

#4- The KK10 kid is named Dre Parker. Mr. Han calls him Shao Dre. Shao apparently means “little” in Chinese. That doesn’t even hold a candle to Daniel Laruso, Daniel-San. Shao-Dre? There is no ring to it. It was too forced, like the Friends episode when Ross tries to be like Joey.

#5- The main characters in KK10 were 12 years old. I have several problems with this... first the romance side of the story. 12-year-old boys and girls are not that into each other, at least in my world. (If they are, heaven help me! I know I didn’t care much about girls that young.) Also, they don’t fight to that extent. It worked so much better when they were high school age. Plus, they weren’t even fighting over the girl in this one. There was just a side love-story. I can’t even remember what they fought over.

#6- After watching the original, I felt like I had actually learned some Karate. I could easily mimic “wax-on wax-off,” 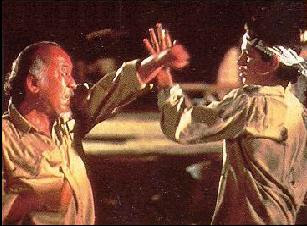 “sand de deck”, and “paint de fence.” I practiced for months after seeing the show. I blocked many slaps from girls on dates using the very “wax-on wax-off” technique taught so many years earlier. KK10 used no such techniques. The method used to teach Shao-Dre is confusing and not easily learned by the movie-goer. “Jacket-on jacket-off?” WTF?

#8- The whole sequence of the Sensai telling the quarter-final opponent to take out the leg, disqualifying himself and putting the Karate Kid out of the contest(referring to both movies here). In KK10 all suspense is lost because it is in Chinese with subtitles. This also ruins the command to “Sweep the leg” when The Karate Kid returns to fight the final match. In the original this is such a huge moment in the contest, and so far-reaching that it really should have been done better in the newbie. Also the KK10 Sensai is not anywhere near as evil looking/acting/glaring/smelling? as John Kreese was in the original. The whole sequence lost all of its luster for me, almost like finding out that Luke and Leia were brother and sister after they nearly made out.

#9- Some of the classic lines that fed the drama and the plot were completely left out. One of my all time favorites: “You’re going out in a body bag!” yelled from the sidelines by a fellow Cobra Kai fighter. Another one spoken by Mr. Miagi when Daniel-san is training in a boat while Miagi is fishing. Daniel-san is working on balance and form standing on the edges of a row boat when he asks Mr. Miagi when he is going to learn to punch. Miagi has already told him to have patience and learn other things first, but Daniel-san persists. Finally, in this scene Miagi says, “Learn how punch when learn how stay dry!” as he rocks the boat throwing Daniel-san into the water. He then has a classic Miagi laugh and says, “you all wet Daniel-san!” Classic.

#10- That reminds me, the Cobra-Kai equivalents are called the Dragon-Slayers. Lame, nay, double lame.

#11- Did I mention no Elisabeth Shue? It hurts to think about it now. 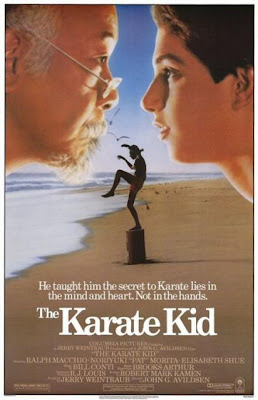 The hallmark move of the first movie takes a backseat to some Cobra-tamer thing. The drama, once again, is lost. No building excitement like with the original. I remember as the feeble, broken Daniel-san set up for the Crane-kick at the end of the first one, you hoped he could pull it off. After all, Mr Miagi said it was “indefensible” if done correctly. Then wham! He kicks Johnny Lawrence right in the temple for the third point and the win. The newbie does this weird Cobra stare down that they barely address earlier in the movie, and for it to become a finishing move was more anti-climatic than the closing scene of Beaches. (No I never watched Beaches to the end, but I can imagine after seeing the first 15 minutes.)

Overall, I think the movie was good, but they should have called it Karate Kid: The Next Generation.

oh geez chad. Total nerd moment here. I am however impressed with your memory. If you watch this show every night and that is how you know all this please don't tell me and I will stay impressed. One thing you are wrong about though. 12 yr old girls are very much into boys, I think you are right for the most part about the other way around though. Last and most important, I still laugh whenever I read WTF. Am I in jr high or what?
Oh yes and last last, come to dinner tomorrow and don't be lame.

Holy crap Chad. I am sure you saw all of Beaches, don't lie to us!

I am really hoping that 12 years olds aren't into each that much. I have boys that are getting close to that age and they could care less. They get grossed out when Jaerd and I kiss. Speaking of kissing, Jared still loves Elisabeth Shue, heck I think she is gorgeous.

Fun post and I don't think I will be watching that movie. For two reasons, your review and the fact that I get annoyed when they remake movies. Like Charlie and the Chocolate factory!

thanks for the laugh, classic chad you're still hilarious!

We could quote the original KK together. "Open your eyes, my darlin' son! This is the gah-den of eden!"