We just got back from a week in Southern California. San Diego, Sea World, Beaches, Disneyland. The next update on the family blog will be all about that. For this blog, I was thinking about photos, as in photographs. As in the people inside those photographs.
As we walked around Sea World, and Disneyland, we took tons of pictures, just like everyone else,(except maybe the Asian visitors because lets face it, they take a lot of pictures.) So as we were doing so, I noticed that it was impossible to eliminate total strangers from some of the pictures. Well, that in turn got me thinking about how many photo's I am in and have no idea? I figure this trip alone at least 50 people took a picture of me, some of them had no choice, I was standing too close to whatever object they were photographing. Some, like most of the Disney Princesses, just wanted a photo of me. 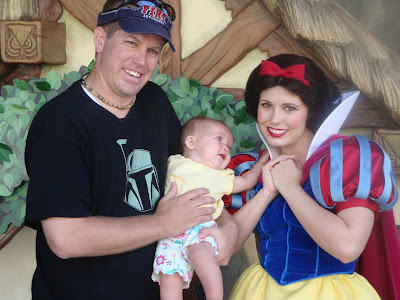 I started looking through the photos of ours that have strangers in them. Poor folks have no idea they are being scrutinized right now. It is quite entertaining to look at the people that are in your photos. 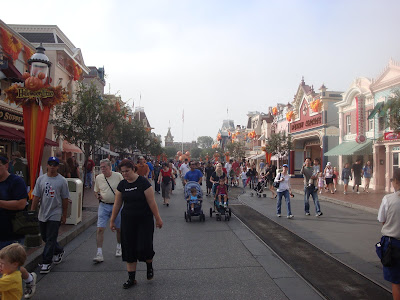 What is the lady in the black shirt thinking? It appears she is not very happy at the happiest place on earth.
I hope that the afterlife includes a huge photo album of all the photos that were ever taken of me. I wonder how many of them caught me picking my nose? I wonder how many are just my butt. I remember once at an air show in Vegas I took a discreet picture of some guy's feet. He had napkins tapered and cut to guard his toes from the sun. I had the friends I was with pose just right so I could secretly get a photo of him. He had no idea. His next life photo album will include a picture of his feet and his home made sun shield. Maybe he will congratulate himself for protecting himself from sun cancer? Perhaps he forgot that moment of ingenuity and I am doing him a favor, capturing a memory.
I remember also in my younger years, aka college, trying to get into strangers photos. There are many photos of me out there ruining someone else's background. This was funny to me at the time. Maybe when I see that photo album in the next life I will have some regrets and think I was a jerk. JP Mataalii ruined our shot at getting in our High School Class photo twice. We were perfectly positioned to do the run to the other side thing, and he chickened out because Mr Marine (Vice Principal) was looking at us. Turns out Mr Marine wanted us to do it and was watching thinking we would.
Here's another one photo. 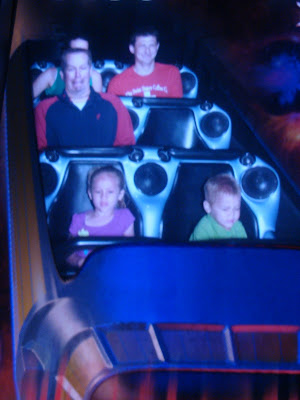 The kid in the back row has no idea I have a picture of him closing his eyes on Space Mountain. Was he scared? Was he sneezing? Poor guy will forever be in my mind as a sneezing rider of Space Mountain, or Ghost Galaxy, as it is called for Halloween Time. (Side note: Very awesome ride. Side note number 2: A lady that was near by when this picture came up on the screen felt bad for me because she thought I was about to cry. Side note 3: The kids loved this ride, despite what it looks like from the photo.)
So these are the thoughts that run through my mind while enjoying everything there is at Disneyland.
So basically I just want to see the photo album that has every picture of me ever taken. Or maybe I don't.
Posted by Chad at 23:42

I have wondered about this subject before. I don't want to see my afterlife photo album. I usually only like about 1% of the photos that are taken of me anyway - and those are the one's I know about.

Last time we were at DL, we had contest to see who could find the worst DL butt. In order to qualify, you had to get a picture of it. Now I feel bad that all those people are going to have pictures of their really bad butts in their afterlife albums. How embarrassing.

In the last photo I thought your kids looked like they were having more fun than you. Where is Rebecca? Why didn't she get a pic on Space Mountain? Don't you ever watch the baby?

So, when I was a teen, the first time my fam went to DL we also went to Universal Studios. We ran into some Asian guys who wanted a pic with an American Girl. Lucky me, I just happened to be in the wrong place at the wrong time and didn't know how to say "no." Nonetheless, it was creepy.

I'm with Aimee - - I would rather not see pictures of myself - not now or later. Sadly, I hope I don't have to go through my afterlife album. I'd rather look at my kid's albums instead!

This is a deep thought for you Chad. It scares me just a little! I love silly pictures, lucky for me I know have a collection of photos with Matt in the background pulling a mad man face! We don't take pictures when we are on vacation, we just have a contest to see who can find the "little person" first. Jared usually wins!
You look like you are going to cry in that picture and stop making up some excuse.
say cheese.

Does Angie mean little like formerly known as midgets? Im so confused. This is one of my favorite post topics by you. I bet my album has really ornery looks and mean ones and flat out witchy looking ones. My standard face intimidates people. Its a grumpy face that I get from my mom. My dad on the other hand has perma-grin and Sarah got that one.
Stop going to Disneyland 10 times to our 1. You are setting an unreachable standard for those of us that have jobs. I hold down the couch. No one pays me though.

oh yes and go on to Peton blog from mine to see her tribute to your topic and her funny pics. You will like the big lady little lady one

April... I am glad you liked it.. I feel like it is missing something. It came together better in my mind than it did on here. Natalie puts a fun spin on it too... hmmmm.