A few years ago today, Pearl Harbor got rocked. Lest ye be confused, not the good kind of “rocked” that Def Leppard penned lyrics to. The “meet me after school at the church” rocked. In the days that followed the Pearl Harbor disaster, America stepped up to the plate and smacked in RBI after RBI. 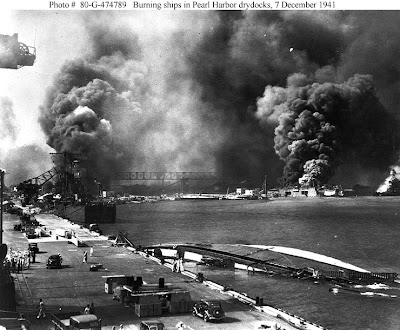 I have mentioned it lightly before, but that generation is so inspiring to me. Citizen and celebrity alike stood in line to join our armed forces. Those who could not qualify for military service obtained medical training, or worked in factories to build war machines, or did something. They did not lead protests against our nation, or give interviews calling our leaders cowards and murderers. 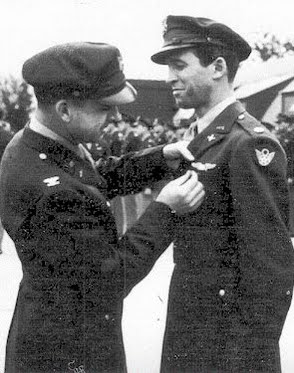 A truly inspiring generation. I love their stories, I love the books about those days, and I am mesmerized when I happen to meet those who remain.

thank you chad, that was nice to read. that time interests me so much, i wish i would have taken advantage of when my grandpa was around, so i could ask him about it.

I'm a huge nerd and know way too much about that stuff. But I'm with you in being inspired by that generation. What's unique about WWII was the clear, defined enemy and borders. It was much easier to rally around that cause than it is to rally around our current wars. Wouldn't it be nice if the war on terror had boundaries and parliaments and kings? We would have kicked the crap out of them by now! Instead, there's no end in sight and we're all getting tired of fighting/paying for 2 simultaneous wars, not to mention the crazy North Koreans. Oh man, now you got me started. . . I usually keep this crap to myself and my nerdy husband.

We were at a Jazz game a week or o ago and they had a vet from WW2. He recieved a standing ovation and I think the fans made more noise for him than when they booed Kobe. I teared up a little and so did the boy.

I am no history buff by a long shot but none the less I catch the just of it. I'm not too much a fan of modern day people and it seems to just be getting worse. Often times I am embarrassed to live when I do except that I don't know that i would have been tough enough to be a woman back then. I might have felt very sorry for myself. I personally would love to just "listen in" on your intellectual conversation.

Great post Chad. I was so disappointed when I read my morning news that there was no mention of Pearl Harbor Day this year...