The following is a spin off from a magazine article I wrote that is a local publication for Salt Lake area fire departments:

I love my job. Most of my coworkers also love their jobs. It is almost a necessity. 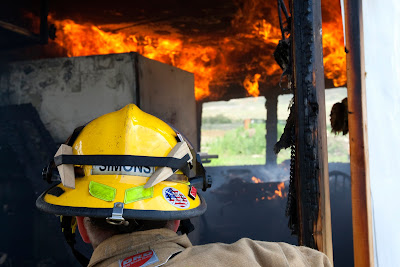 For as much time as I am required to be there (56 hour weeks, 48 hour shifts)-and as much time as I have to spend with the same small group of people in the small confines of the fire stations-to not like the job would make for a miserable life. Forty-eight-hour shifts would get very long, and most of us would surely become serial killers.

The fire station is literally my second home. One-third of my life is spent there. The guys that work out of the same station as me have become my second family. We see each other at our worst, and at our best. We see the general public on their worst day and have to help each other through the situation, as well as those to whom we respond. We are often required to perform difficult tasks in the worst of circumstances. As a coworker, I have often doubled as impromptu marriage counselor, voice of reason, listening post, sound-board, etc., (but not so much a shoulder to cry on-we are all tough as nails). It seems no conversation is off limits. I know things about people I never cared to know. I have shared things I never thought I would share. The water-cooler conversations and unsolicited free advice on virtually every topic imaginable are easily accessible-whether you are looking or not. Through these conversations and experiences, we become like family. We share a bond unparalleled in other professions.

Since I live at the fire station one-third of the time, I have chores, just like I do at home. All of us have them. We live there, remember? We do dishes, clean the bathrooms, take out the garbage, cook dinner, make our beds, and so on. A friend of mine recently did a “ride-along” with us and was amused that a group of men were doing household chores. She pondered out-loud that our spouses must be lucky women.

There are some differences living at the fire station versus living at home, however. Here a few examples (for your entertainment, of course):

At the fire station, my clothing is arranged in such a way (at all times) to allow me get dressed as-fast-as-possible. When an emergency occurs, we are literally “on the clock.” We are expected to be fast, and the faster we can get there, the person or place having the emergency has the best chance of survival if less time passes. Every second literally counts. So at night, rather than just tossing my clothes wherever I take them off, I carefully arrange them so that I can get dressed quickly, in the dark, half asleep, 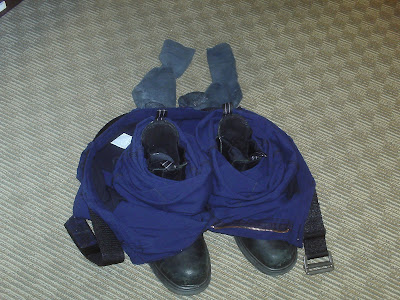 and without putting my pants or shirt on backwards or inside out. I have a 98 percent success rate here because lets face it, after the fifth call at night, my coordination and level of awareness drop off drastically. Hopefully an inside-out shirt is not considered out-of-uniform after hours! Ask me sometime about my zipper-in-the-upright-position percentage.

A shower at the station is rarely enjoyable. There is only one thing more annoying than getting the emergency call right as you reach full lather. (That one thing will not be discussed here, since this is a family article) It is so hard to be all sudsy and have to do a quick rinse, a quick dry, and run down the hall trying to get dressed while jumping into the fire engine and trying to hear the details from dispatch. I have shown up to multiple emergency scenes with a hair full of conditioner and soap in my cracks, crevices and armpits.

It is true that firefighters are awesome chefs. It is also true that I have eaten more cold-gourmet meals than I care to discuss. It is almost a given that we could sit around the station all day without an emergency call until we sit down for that hot meal that someone has been working on for hours, and then as we sit to eat, the alarm goes off for someone experiencing an emergency, whatever it may be. A particular paramedic, now retired, was infamous around our department for losing his temper if an emergency call came in at dinner time when it was his cook shift. The crew that worked around him had fun with this, sometimes calling in test pages just to get him worked up.

With that said, I do have the best job in the world. On some small scale, I get to show up at someone’s worst possible moment and do everything within my training to make it better. Its hard to beat the feeling when you are able to pull the family picture album unscathed out of the apartment that just burnt up, or when we get to tell “Little Johnny” that Grandma is going to be just fine after a few days in the hospital. 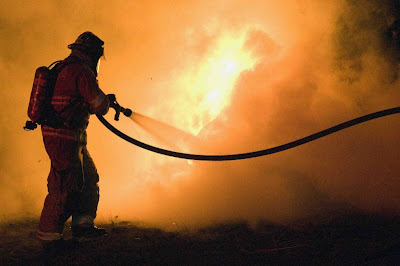 Crawling through twisted metal and broken glass to get to the injured motorist just to tell them to hang in there a bit longer while we cut the car away from them is up there too. I get paid to break stuff (from time to time). My universal house key is an axe. I open car doors by way of hydraulic shears. I get to drive fast in the opposite lane of traffic. I run in, while you’re running out. I have the best job in the world.

So you can keep your 9 to 5 gig. I will be just fine working my job, even with the reduced hours of sleep at night, the incomplete showers, and the cold meal that has been reheated 4 times. Its all worth it when I get to drive down the road in the opposite lane of traffic, honking the air horn, blaring the siren, and cursing the drivers that don’t understand simple traffic laws. Its worth it when we have to throw out the prime rib that was cooked at 5 p.m. for the Mac and Cheese at midnight.

One question: You use conditioner?!? I love that you posted this! "My universal house key is an axe." haha I love it! I get the feeling that this family of yours works much better if it is an all-male family, eh?

Love this post! I had the same thought... "Really, Chad? Conditioner?" Maybe that's why your so darn pretty all the time. :)

You are lucky to love your job! Not many people can say that.

I think I would love that job, too. However, my husband would not be happy with me living with a bunch of men. Firemen, at that. That's even scarier for my husband.

Did I ever tell you of the time we were in a bad car accident, and the fireman that showed up was my huge, jr. high crush? Oh, that was awkward.

Natalie, who was your crush?

I still don't believe that is you in the picture!!!

I didn't even notice the conditioner I was stuck on the other thing that wasn't going to be discussed here but then I realized it couldn't be my first thought since your wife should be at home. I'm terrible, I already know that. And then I was sickened that I thought of that so I was trying to mentally wash my brain out with soap but going #2 was probably it, yes I did figure that out eventually.

Those are some cool pictures.