Seriously, this post is going to be all over the place. Each paragraph could be a whole new topic. By the time you are finished you will have spun around twice, slipped like a grandma using a walker on an ice rink once, and probably felt somewhat nauseated (more than normal while reading my posts.) And if you think I go off on tangents on my other posts, then just brace yourselves, I feel this is the post of tangent posts. I have had some ideas stewing in my mind for a while now, and none of them have blossomed into their own post, so here we go.
First, an open letter to the texting generation:
I get the whole texting thing. I am a texter. 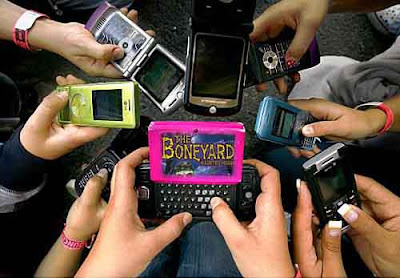 I like it because it completely negates the need of the awkward phone call amongst men for a quick message. See, men differ from women in phone etiquette. Prior to texting, if I needed to make a quick call to find out if someone was showing up to the ball game or not, it would take a few minutes due to the obligatory small talk. You know, the how are you? What's up? And the person on the other end being required to ask the same thing... and on and on. Now a quick text handles that. I love it. Women have the ability to turn a quick call into 45 minutes, no matter why they call. Men lack that ability and that desire. If Darwin was right, we will start seeing female children born with phones on their ears. Was the bluetooth phone thing invented by a woman?
I am also okay with some of the shortened phrases. Yep, I'm talking the LOL, LMAO, WTF, BRB, ROFL, ROFLMAO, DYSTH (thanks Angie), ASL?, MMA, BTW, RUOK, RUFTT, BFF, BFFL, KMB (KMA), TTYL, and on and on. My personal favorite is WTF! It's like missionaries always saying "fetching" and feeling like it was okay. I think "fetching" is used more by 19-28 year old LDS men than anyone else on Earth. Even more than dog trainers. (All of this is based on factual information by the way, or BTW.) I understand that typing out many of these is long, and everybody that texts knows these or learns them fast. (If you need any acronym decoded, there are many websites devoted to this.) I implore all texters, however, to strike these immediately from your vocal language. Actually saying "L.O.L." while talking to someone face to face is the most ridiculous thing ever. And it annoys the crap out of me. This is a growing trend amongst the young, olympians of text. It has to stop. Don't make me start a coalition.
Second: An Open Letter about all Celebrities but mostly Tiger Woods:
I tried to avoid this topic, since it is probably the topic of every water cooler conversation worldwide. My only thoughts on this is that it seems no one could surprise me now. I do feel that celebrities do not have a right to privacy however. Let me explain: Celebrities want us to follow them when its the positive stuff. They put themselves in the limelight whether by starring in a movie, owning the PGA for years, whatever, and they want to be top of the charts at those times, asking us into their lives, and then expect privacy on matters like these? No way. Not gonna happen. When we follow you through the good, it translates into big money for you. When things go bad, you better be willing to stay at the plate. Thats all I have to say. That and they just don't make them like Jimmy Stewart anymore. I really hope Jeter's name is not one of the 30 or so remaining on the "yet to be announced steroid list" for MLB. That would be a bigger blow to the sports world than when Tyson bit Holyfield's ear off. 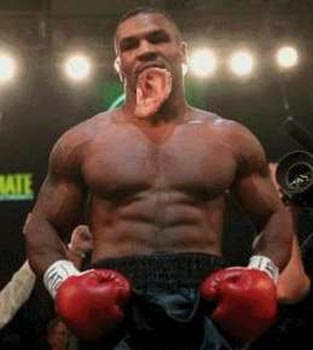 (Side Note: these situations always make the best chain emails. I got one the other day of the "Woods' Christmas Card" showing a beaten up and bruised Tiger and his wife–(x-wife?)–holding a 6-Iron. It made me LOL. 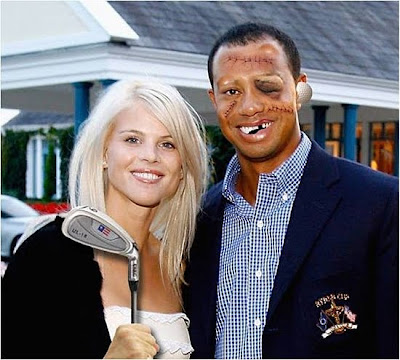 It reminded me of a guy that sits near us at Utah Football games that we have for years called the "retarded Tiger Woods." Gotta love Photoshop, Tiger looks like the latest Garbage Pail Kid.)
Is it wrong of me to have been trying to come up with enough information to claim an affair with Tiger too? I could say I was at Augusta in 2004 and met up with Tiger at a sleazy hotel. I am considering this for the financial payoff to keep quiet only. I would never want it to go public. I could settle for 5 million.
Conclusion
I had more to say, more randomness, but this went longer than I thought it would, so I am leaving it there for now. I guess you only spun around once, maybe just stumbled in your walker rather than full on slipping, and didn't quite reach the vomiting Nirvana you were hoping for. TTYL.
Posted by Chad at 15:09

Tiger is a narsisitic (I know I know my spelling sucks!) tool! But I do love texting. I too do not enjoy the chatter invovlved in phone calls. I am a busy girl. For this reason I also enjoy Facebook and e-mail. If I could do my visiting teaching via text, or Facebook, or e-mail, I think I would actually do it.

I like texting. I like abbreviating when texting. I HATE the LOL - I could punch someone every time I see it! My sister who teaches 6th grade had someone put IDK in response to a test question. She about blew up. She said when they write papers they use this stuff and she tells them to rewrite or fail.

As for Tiger, I have no comment. I guess this just goes to show that some people will never be happy. BTW he does look like a garbage pail kid. Way to go Photoshop!

Okay, so maybe I did have a comment about Tiger.

I don't know if I have an opinon about the texting thing. I guess it just comes from the days of having to pay by letter, was it ever like that? I still feel like you have to be on a texting leval between each other. I get annoyed when people from church text me. Either just call or email me. That's how I feel. I have no sympathy for celebrities and their privacy, don't go stalking them, but they are famous and rich because of me. So deal with it. Their are plenty of celebrities who have been able to keep their personal lives private, look at Dolly Pardon, I love Dolly, who doesn't?

Dolly Madison?
I do not know what most of your codes meant. I do however know TWSS and thats all that matters.