I had higher hopes for this blog. I can't let it die. If it is going to be just about me, then so be it. There are a lot of examples of solo artists being more successful than the group right? Paul Simon dumped Art Garfunkel, and though I disagree, critics think he was better solo. Bobby Brown broke up New Edition. David Lee Roth and Van Halen, Neil Young dumped Crosby Stills and Nash, Beyonce-never mind, George Michael put an end to Wham, which was most definitely a good thing, the only problem being that there was still a George Michael. So, Rebecca, get the hint... this blog needs your participation.
Until she decides to join back up, I will continue to ramble. First up... have you all heard about Shaq's (as in Shaquille O'Neal/as in basketball/ as in big middle man) latest venture. I am not talking about his trade to the Cav's. I am talking about his upcoming talk show. This should give everyone in the world hope and confidence that truly anything can be accomplished. Seriously, have you guys heard him talk? He makes Sly Stallone sound like a profound orator, maybe even a philosopher. If you need proof go back and watch Kazaam. (Kazaam- a low budget film starring Shaq as a genie- not that I ever watched it.) 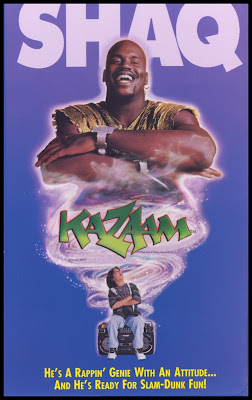 Okay, I watched it. I have no excuse. I guess I don't really know the budget either, maybe they intended this to be a blockbuster. If given the choice between Kazaam and Beaches, I would choose Beaches again. Please don't ever put me into that situation. I think I may watch this new Talk Show just as a comedy sketch. I wonder what they will call it? I wonder what network will air it? I guess the rich and famous can get away with anything. Plus, Shaq is entering the world of Pro Wrestling. I think it is called WWE now. Not positive. Wrestling has changed its name more than the Los Angeles Angels of Anaheim. Didn't Karl Malone and Dennis Rodman already prove that basketball pros do not put on an entertaining enough show as wrestlers? OK, I did watch that match too. Even ordered it on Pay Per View. Karl Malone and Hulk Hogan took on Rodman and Rick Flair. I can't remember who won. The wrestling match continued into the 1998 finals however, and Malone flopped several times in those games. (Cheap shot from a bitter former fan?)
I remembered another story from work that may be entertaining for you all. So here it goes. This happened a few years ago, so I can safely tell it without violating any HIPPA laws, I think. Anyway, so we get paged out to a full arrest. (Full Arrest means that some one's heart has stopped beating, and they are not breathing. Not a good thing for those wishing to live, but, sadly it happens all the time.) The place we get called to is a group home of sorts, where many old people live together and take care of each other. We get to the house and pound on the door yelling, "Fire Department!" Yelling "Fire Department" somehow gives us the right to use whatever means necessary to enter the home. So we knock hard on the door, and this older white guy answers. A quick look at this guy tells me two things instantly. Number 1- We would probably be seeing him very soon, speaking from a firefighter/paramedic standpoint. IE- he looked sick and nearing his own major cardiac event. So much that we asked one of our EMT's to check his vitals when we left the place. The second thing that I learned, the Mr T starter kit should not be ordered or worn by white people. If there was a picture book definition to "bling," this guy's portrait would be exclusively it. So the White Mr T-minus the Mohawk-points us to a room towards the back of this 5 room apartment. 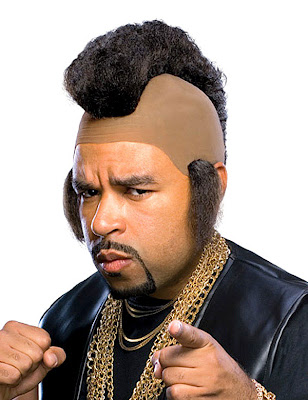 Quick necessary side track: when an individual is in full arrest, and paramedics are there, 3 or 4 quick things have to happen. We have to get the person to an area where we can do work, all around the body. We also have to move them to a firm surface. We also have to remove their upper clothing. So people that collapse in bathrooms, or in their beds, or where ever, are often drug to areas of the home that allow us more room to give the person every fighting chance. Back to the story, so we are heading to the room that White Mr T told us to go to. As we walk into the room, sure enough, a lady appeared to be unconscious and not breathing in her bed. (Now the sidetrack info becomes relevant, right?) So my paramedic partner and I exchange quick glances of understanding and without saying a word fling the bedspread off the lady, grab her legs, and pull her to the floor of her room. As soon as she hit the floor at the foot of her bed she started screaming. However, this was not my Baywatch moment. (Baywatch moment- person in cardiac arrest from drowning, lifeguard-paramedics pull victim from water, give a mouth to mouth breath or two, give a compression or two and the person coughs a couple of times, water comes out of the mouth, and the person invites the whole crew over for a beach blanket barbecue later that night for saving her life.) 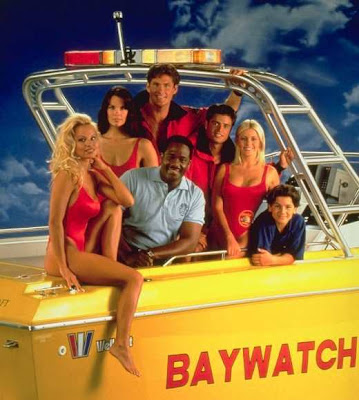 Nope, this lady screamed out of sheer fear from the two strangers that just interrupted her full-arrest looking slumber. At about the same moment, White Mr T comes to the door and with every last breath he could muster out of his 65 years of smoke filled lungs says, "next room down, next room down!" You'll have to insert you own raspy sounding old guy voice, because I just do not know how to type that in effectively. So, without helping the lady back into her bed, we moved down to the next room. See, we should have helped her back into bed, but time is of the essence in these medical situations. And since I know you will ask, no, the real patient did not make it.
This brings up another point. Yes, I can laugh about this story now. Hopefully you see the humor in it too. Firefighters and Paramedics may come off a little "cold." In reality, its how we deal with the many terrible things we see and are forced to deal with. It is sad to see so many people deal with lost loved ones, but we can not get too emotional about it or we would crack. Cracked firefighters and paramedics are not effective ones. I did however cry when the Stay-Puft Marshmallow man was destroyed. He had such a short life. So many things left unaccomplished. 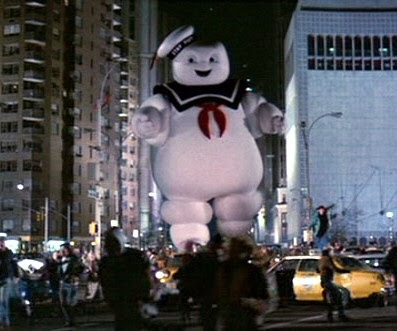 I want to see a picture of YOU in a do it yourself Mr. T get up. I bet you can find one on Ebay.

Did you save the life of the one in arrest?

Can you imagine being flopped out of your bed while you are sound asleep like that. that is hilarious. did she break a hip? I have to disagree about the WHAM though....I loved them back in the day and have never been a lover of the Solo George I also agree with you on Simon and Garf....of course I do though right?

I am laughing my butt off at that story!! I can only imagine some poor grandma wondering what in the world you were doing to her. Ah man, that made my day. I will agree with you on all the above named bands who should have never broken up. Sometimes the girls do okay though, right? Beyonce, as you mentioned, and I like Gwen Stefanie better solo.

oh my goodness, this whole post was hysterical. you should try and make some money with writing, for reals. i bet you (just like the marshmallow man) have many cool things to teach people!!

Cherrie, nope. She didn't make it.

Chad,
Waking up to a group of firefighters throwing off the blankets and dragging one from ones bed is a magical moment, not a nightmare. Ok, so I've never personally been in that situation, but it sounds fun.

As for the White Mr. T, I'm thinking Halloween would be a perfect time to try that out!

Kazaam. Really. Yuck. It's gotta be bad if you're willing to watch BEACHES over it!(Honestly, never thought that would've been an option for you).

Although I hope Rebecca does join in on the conversation, I agree that this blog should not die down. Too many people having a great laugh!

P.S. Did you know the Post Office now sells Simpsons stamps? I bought some the other day, and I laugh every time I look at them!

That was the best laugh out loud story ever!! I cant believe that poor old woman didn't go into cardiac arrest too. Keep em comin, I need a good laugh every now and then :)

Ha ha. I can just picture it. That is hilarious!!!