Lessons on Sports For You Female Readers

Don't let the title fool ya, this will be informative to all you stay at home soccer mom's that I have come to realize are the main, probably only, readers of these posts.
So I was thinking about this the other day. So many women hate it when the men of the house watch sports. I have often wondered what the big deal is? 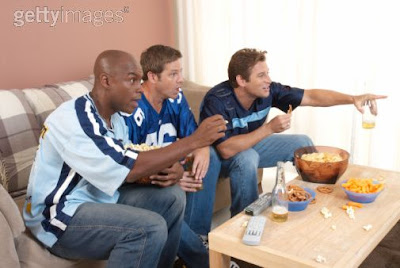 Is it because there are so many sports on TV? I battle this argument with the fact that a straight comparison between televised sports and all the shows you women watch: Bachelor, American Idol, Lost, Found, Survivor, any one of the 10 dancing shows, America and Talent, Bachelorette, etc etc.... would reveal that you have many more shows to keep up on than we have sports to watch. So that's not valid, to me.
I have heard other arguments that so much time is wasted in front of the television. That may be the case in some homes, but I am approaching this from the standpoint that husband x works at least a 40 hour week, takes care of the yard whether it be mowing the lawn or shoveling the snow, and does his fair share of other duties around the house. Yells at the kids when they act up once in a while, takes out the garbage when it is too stinky for wife x to do so, etc. So we are throwing that out as well.
Actually, I am throwing out all arguments and offering my explanation without responding to a specific antithesis.
Guys get together and watch sports to bond. Yes, it is that simple. Here's where I relate to my feminine side... Think of it as book club. I know if this were a cartoon, a light bulb would be hovering over half of the heads right now!

So its not a light bulb, but every Simpson's fan knows that if Homer is thinking of a doughnut, it represents a good idea!
Again, I digress. So yeah, book club. You women think that you have us fooled. That you really get together on a monthly basis to talk about the book you have all passed around the neighborhood. Yeah Right! We know better, and we are okay with the fact that you really want to meet up to catch up on all the latest gossip. Perhaps you discuss the book for 10 of the 90 minutes or longer. We understand that you need that time. That's what sports watching is for us. A book Club of sorts for the men. Even though very little conversation is necessary at our meetings. A simple high five, or shared excitement over a great play can transfer more information than the hours of gossip you divulge.
So just as you live vicariously through the damsel in distress that is saved by a vampire, we too cheer on our teams or favorite players because in some small way we escape to that stadium as well. You have book clubs centered around Harry Potter stories, we have the Los Angeles Angels. You have Edward Cullen and Bella Swan against the Vulturi and Demetri, we have the rivalries like Yankees versus Redsox, Giants and A's, Packers and Vikings, and on and on and on. It really comes down to the same thing. So go to those book clubs and discuss the affairs of the neighborhood and so and so's sex life, but leave us to our sports.
Go Angels.
Posted by Chad at 23:23

Do you remember the Simpson episode where Homer has two wives, and he goes off on a day dream of what fun he could have with two wives, but it's him in a hammock watching two wives to the yardwork. So much can be learned from the Simpson's!

I love to watch sports, but not all. The tv is full of so much crap and I am not about to boycott it that I choose to watch sports on tv. Love me some Football and I always cheer that the Patriots loose.

But I don't believe that it's about bonding, do men really do that? It's just an excuse to watch other men get hurt.

I have no problems with sports and men watching them as long as the kids can stay home while i leave and go do what i want to do. I do watch Jazz though and Im way less of a fair weather friend than Dave when they lose. I agree with all of your comparisons but I have to tell you I never talk about others sex lives....yuck....the visuals....yuck!!! I do have a few issues with World of Warcraft though......dont worry im working through them. I liked your post and homer and especially the doughnut.

There was just an article in the Wall Street Jounral on this. It said that men need an activity to bond over. They will not just sit down and talk, but that they need an activity to talk and bond over. But that men's need for friends is just as relivent as a woman's. On a random side note of pure shock and horror, you know the names of the Twlight characters? Wow. I think I am going to need some time to wrap my head around that one!!

I keep up on pop culture, what can I say? My knowledge knows no bounds.

I don't mind watching sports with Rob at all, I'll even hang out when he has fishing on tv. I do have one concern though, what do you think about him watching womens softball while home alone? Should I be worried about that one? Go Yankees.

Meisha, you are exempt from needing this advice. Anyone who names dogs after sports players and sports area buroughs or subburbs surely understands!

I forgot to mention how much information and mutual understanding transfers with those simple high fives. Few words are even needed after that.